According to the New York Farm Animal Save there are over 80 live animal businesses in the NYC five boroughs area. There are four within walking distance of my apartment. These urban farmed animal slaughterhouses imprison and slaughter young chickens, turkeys, rabbits, pigeons, quail, ducks, guinea hens, lambs, sheep, goats, cows, bulls and pigs. They all come from the intensive corporate farming industry, in other words from factory farms. As one walks closer to the vicinity of a "live poultry" business a noxious mix of blood, urine, feces and death penetrates the air; walk through the door and the stench of the slaughterhouse is assaulting. Rows of filthy cages stacked on top of each other line all sides of the walls. The animals are stuffed into the cages,  huddling together with a pale disquieting awareness. Men in long plastic aprons and rubber boots preside over the inmates. When a customer wants to purchase an animal; the man grabs the frightened animal out of the cage to the alarm of her cage mates and carries her upside down by her feet or hind legs--wings flapping, bodies’ writhing-crying out. There is no thought for her; she is degraded, reduced to a routine violence as a food commodity and that's all.  She is bound, weighed and killed within minutes. The customer is handed a plastic shopping bag that contains a warm dead body...
`

This art project is an eco-feminist protest that aligns feminism with animal defense. The message "my body is mine" is written into a simplified woodcut of a nonhuman animal-other silhouette. The starkness of the message resonates with me on multiple levels that intertwine feminism with animal advocacy. A decry that suggests that we have an intrinsic right to own our body, yet bodies are also sites of unspeakable brutality and oppression through the many systems of racism, sexism, ableism, and speciesism.
Farmed animals are denied even the most basic form of consciousness; that of sentience, their lives are utterly controlled and erased so that their bodies can be manufactured into meat. Female farmed animals are condemned  to a lifetime of physical and emotional violence for their eggs, milk and intensive breeding programs before they are considered spent and sent to be slaughtered.

I have chosen the reductive process of woodcut because it has a history of social protest and anarchy. I paste at night after the business has closed or very early in the morning. Sometimes I've witnessed the trucks come to unload boxes of animals. Often the animals are dropped off and must wait outside for the business to open regardless of the weather.

My first woodcut was pasted on an abandoned abattoir wall where great numbers of animals were slaughtered around the turn of the 20th century. Locating historic industrial slaughterhouses in Brooklyn is difficult, gentrification and urban renewal transform these sites into new forms of capital. Through research, I was able to dig up a small, un-detailed map of a section of Bushwick that notated the location of five old slaughterhouses. So my first sow was pasted on the wall of a once 1910’s to 1950’s abattoir.
Since then I’ve come to the idea that these woodcuts should be pasted on or near the present day “live poultry” slaughterhouses that exist in plain sight around my neighborhood and further out in Queens. My Body is Mine has grown from a historically sad and forgotten place to one that I feel viscerally, their voices clearly heard as I paste. I ponder the question posed by a fellow artist, who quotes Judith Butler, "what makes for a grievable life?" My intention is to acknowledge the beingness and presence of each individual. It is an insufficient protest, one that can never set them free; each of them will be killed at some point because their bodies are viewed as consumable. I do it as a way of bearing witness to their anonymous suffering, their innocence, and their death. Each time I paste a woodcut on an outside wall I take a picture. Within days the woodcut has been shredded off.


My Body Is Mine 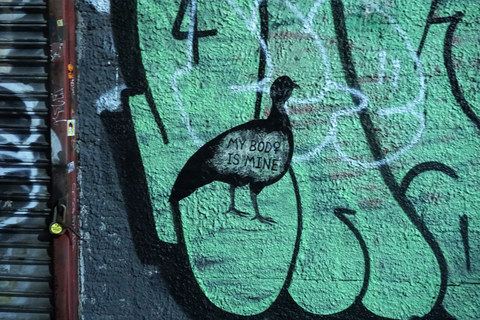 My Body is Mine: Turkey
2019
woodcut near slaughterhouse 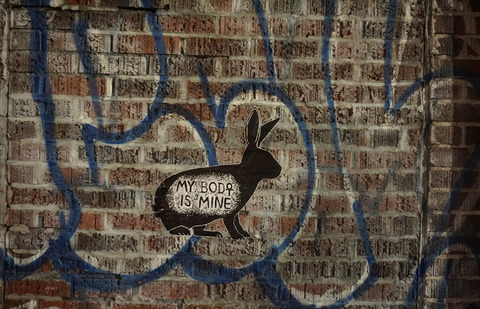 My Body is Mine: Rabbit
2018
woodcut on slaughterhouse wall 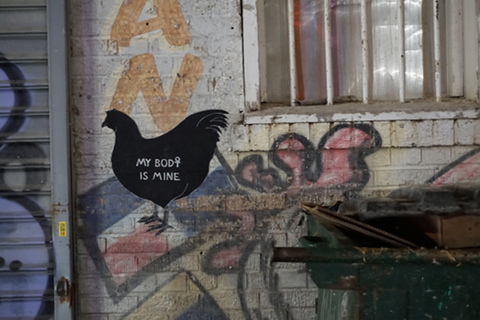 Hen: My Body is Mine
2017
woodcut pasted on slaughterhouse wall 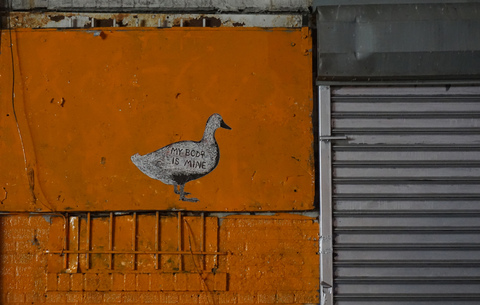 My Body is Mine: Duck
2017
woodcut on slaughterhouse wall 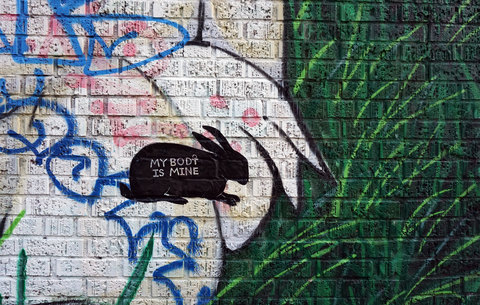 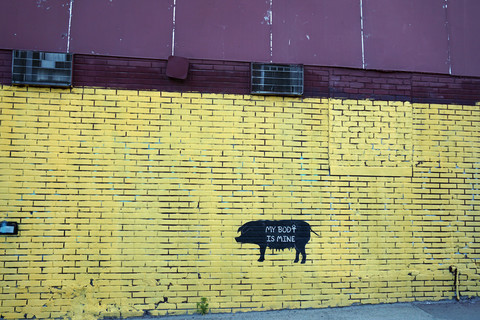 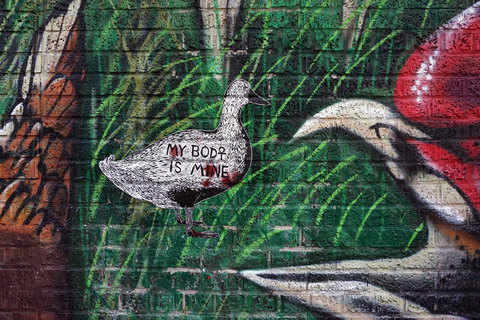 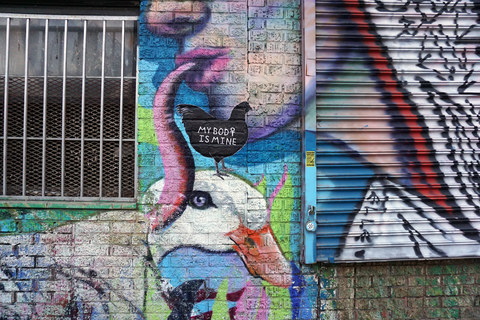 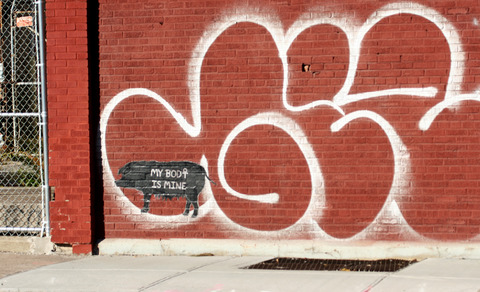 Pasted on site of a historic abattoir, Brooklyn, NY. 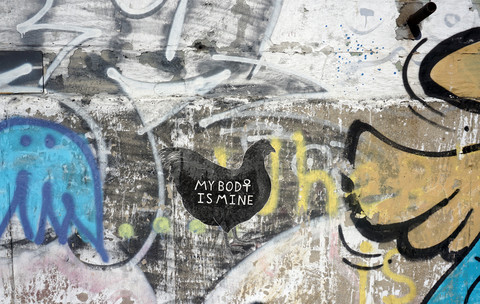 Pasted on site of a historic abattoir, Brooklyn, NY 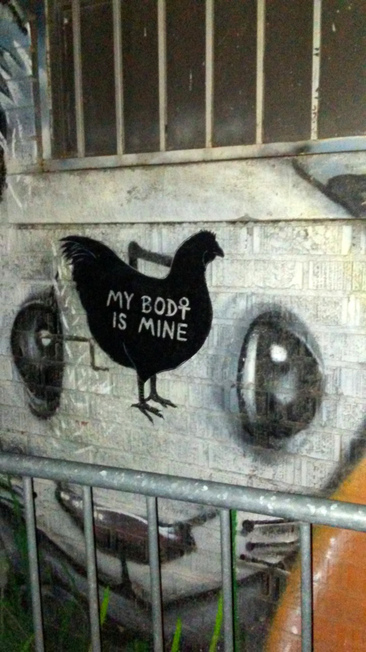 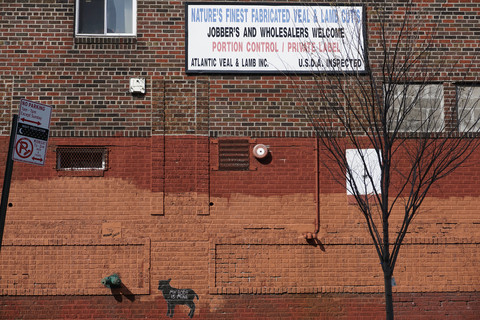 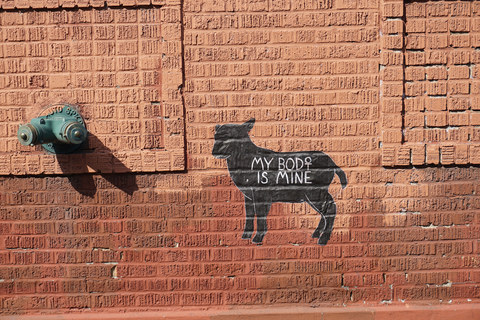 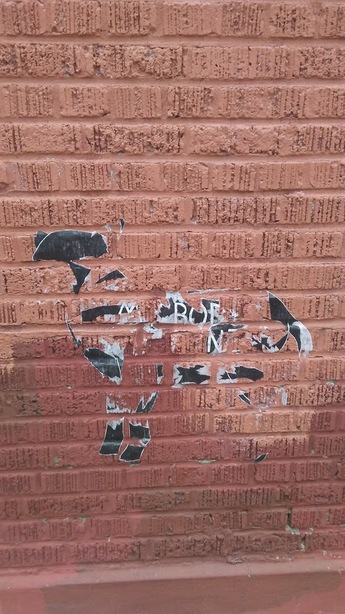